"Only you can decide where you belong. Maybe there's some truth to that, but you don't always have the luxury of choice. For example, you don't choose family, and I didn't choose who I live with in this sea of ruins. Only those who were dealt a good hand can play for the win. Those with a losing hand of mine can only endure, waiting for the opportunity to strike. Even if it ultimately leads to my own downfall...it would still be better than ending up as the sole loser." ― Zen Kubota 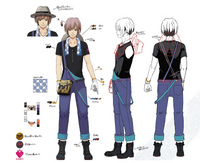 As a 25-year old young adult Zen has violet eyes and chin-length pale mauve hair with bangs which meet between his eyes. He wears denim overalls which are rolled up and cuffed half-way up his calf, and only buttoned on one shoulder with the other strap hanging loose around his thighs. Underneath he wears a black undershirt with a pink heart logo on his sleeve with "FARM" written underneath it. He wears black laced work boots, white gardening gloves, a sun hat which he hangs off his back by a tie around his neck, and a short white silk scarf with a blue pattern featuring the Japanese kanji "田" which means "rice field". As a child, his hair is ear length and he wears a sailor school uniform with shorts. In old age, his hair is chin-length and white and wears the same outfit as his young adult self. In the swimsuit DLC, Zen is shirtless and wears an unzipped pastel green hoodie with a white sprouting plant symbol on the lapel.

A farmer who works deep in the mountains, and knows more about survival than the average person. Contrary to his cute face, he's cynical and often makes fun of others.[1] Zen's favourite food is sweet things, he dislikes sour things, and he is allergic to fish.

As a small child, Zen Kubota was enrolled in Kaiyo Academy along with the rest of the group. While attending the school, the London Bridge Serial Killer attacked. He gave the children an ultimatum: he would spare them if they chose to sacrifice one of their classmates. The group, all reasoning that she was the most popular classmate and so mistakingly believing she would not be voted by the others, unanimously voted for Sachika, and Sachika was subsequently murdered and mutilated. The event was subsequently covered up, and the group all lost their memory of the event along with other memories of their early childhood.

After both of his parents lost their jobs, Zen and his family moved out of the city and into the country to live with his paternal Grandparents on their farm. Zen's Mother and Father were able to find work at the Monkey Tree House Village, an outdoor resort owned by the Mashiro Group. Zen took quickly to country life, and enjoyed working on the farm in his spare time.

After learning the truth, Zen was left extremely confused, disgusted at the lies he had been told, and unable to understand the dynamics of his family tree anymore. His confusion came to a head at his Grandmother's funeral, and he ended up vomiting at the wake. He began to see himself as subhuman, as the "Son of a monkey". He violently confronted his Mother, kicking her repeatedly while demanding she tell him who his Father is, and she confessed while begged him to keep it a secret. Unable to deal with his anger, Zen then began to extort his Mother for money on a daily basis, beating her if she refused, a pattern which continued for years. Zen became estranged from the rest of his family, who celebrated his older Brothers' successes as a college graduate with a fiancée, while they all looking down on Zen as a violent delinquent. Zen's Brother's fiancée Rumiko moved in, and though Zen initially rejected all her attempts to bond with him, she eventually became the first person apart from his Mother and "Grandfather" who knew his secret. She did not look down on him, and over time Zen became closer to her. She encouraged him to go to college and study agriculture, which he did succesfully.

Covering up the incident, Rumiko and Zen's "Grandfather" told his parents and Brother that Zen had attempted to rape Rumiko, and that he had injured her in the process. Zen was exhiled from his family and their home. For the sake of the rest of his family, Zen still kept the family secret from them, and Zen's "Grandfather" told Zen that he should be his successor after he dies. Rumiko met up with Zen at the bus stop and they said goodbye one last time, Zen finally calling Rumiko his Big Sister like she'd always wanted. Zen left his family's farm to go find work on another farm in the mountains.

As with the other survivors, Zen quickly learned that they had all found themselves on Garage Island with all their belongings stolen and an x-shaped button attached to their belly button. The group surmised that they must have been kidnapped to appear in some kind of reality TV show. 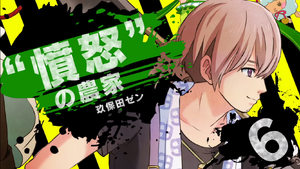 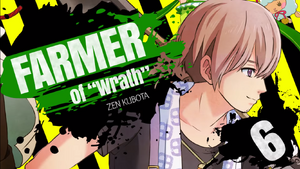