"As you sow, so shall you reap. A punishment for every sin...Consequence for every action...There will be judgement for all, without exception. Nothing and no one can escape this truth. Not this world that has already met its end...or those who should no longer be alive. Not even myself, despite having become the executor. All are equal, for we all lambs to the slaughter." ― Yuma Mashiro

Yuma has waist-length brown hair that is tied in pigtails with square bangs hanging over her eyebrows where there are two small hair strands hanging on either side of her face and ruby-red eyes.

Yuma is a woman who is very aware of her heiress status as the only daughter of the founder of a powerful business group and the fact that her family is incredibly wealthy. As a result, she is quick to look down on and judge others and prone to making sharp-tongued, often cruel, comments that are worded in such a way that people initially think she must be joking. Because she was born into wealth and used to having servants and delegates her motto is "if you work, you lose", but while trapped on the island she realises she has to work if she wants to eat. She does not like to have a debt to anyone, and promises massive sums of money to the other survivors on the island in exchange for small tasks like sharing their food.

At age 25, Yuma was the only daughter of Renji Mashiro (真白レンジ, Mashiro Renji?) the owner of the world famous enterprise known as the Mashiro Group.

Her mother, Moi Mashiro, suffered from severe illness that prevented her from traveling with both Yuma and her father, and her father bought the Belle Moi, a huge cruiser, to make sure she can travel with them.

One day, when they were having dinner on the cruiser, Yuma's father complained about the fact that Liver Sashimi, Moi's favorite dish, was not on the menu, to which he angrily called for the chef, scolding him about Liver Sashimi not being in the menu, to which the chef replied by the fact that liver losses its freshness, which causes its flavor to degrade, and eventually produces the risk of food poisoning.

However, Yuma's father told the chef that he didn't tell the chef that he can change the menu just because he sees it ill suited for voyagers, and that he (The chef) was the one that takes orders, not him (Yuma's father). It even went to the extent where Yuma's father embarrassed the chef by forcing him to bow and apologize right in front of him, his family and the staff of the cruiser, to which the chef hesitatingly complied, which made Yuma's father scoff at this, saying that he was took slow, and that it took 12.8 seconds for the chef to assume this position. He then proceeded to tell him that the Mashiro Group's annual sales for the last fiscal year was 67.2 trillion yen, and that each second costs 2.13 million yen, which in turn means that the chef wasted around 20 million yen of Mashiro Group's funds with his "Tardiness", to which Yuma's father replied by kicking the chef out of the cruiser.

Later that day, Moi called for Yuma, telling her that she would make her father worry should she show her disapproval on her face to him. Yuma replied by saying that she thinks that her father was in the wrong, not the chef. She then asks her mother why is no one allowed to say anything back at her father. Moi replied with amusement, telling Yuma that she can see that Yuma is beginning to have her own opinions. She then continued her speech by telling Yuma that her father is the "President" of the Mashiro Group, and that no one in said company can never oppose him, and that Yuma mustn't tell him that his opinion is wrong. Yuma replied by the fact that her teacher told her that whether someone make a mistake, he, or she must admit their fault and apologize. Moi responded by saying that this logic only applies to commoners, and that the president of Mashiro is never wrong. Moi supported her speech by saying how much big the Mashiro Group company is, and that it operates multiple enterprises in different industries, which makes it hard for Yuma's father to maintain all of them on a daily basis, which is the reason why Yuma's father can sometimes give unfair decisions. Nevertheless, those decisions are crucial for the sake of the company, which is why Moi said to Yuma that she should never disobey her father's orders.

However, Yuma was still feeling bad for the chef. Moi just responded to her by telling her that Yuma must make her decision based on sensibilities that are different than the normal ordeal, and that was the duty of people that are born in wealthy families. Yuma responded by the fact that she doesn't understand all of this, but she understands how her mother feels, to which Moi replied by praising Yuma. Moi then made Yuma promise her to always obey her father no matter what, and that Yuma must support him even when she is gone, to which Yuma instantly accepted.

Days after this, Moi died from her disease, which caused Yuma's father to fall into depression and despair, with Yuma commenting on the fact that she had never seen her father sad like this, and that only his love for Moi was real. She then tried to calm her father down by telling him that Moi was a dignified woman who accepted her fate, only for her father to angrily interrupt her, yelling that it wasn't fate that took her away from him, but it was the fact that her body refused the transplant surgery due to the fact that there wasn't a substitute organ for the surgery. This led Yuma to promise her father to support him in Moi's stead due to it being Moi's dying wish. Immediately after saying this, her father turned completely insane, calling Yuma by Moi's name, before claiming that it was time to start a new business. He then caught Yuma by the shoulder, telling her that his will was the will of the Mashiro family, and that as a Mashiro, Yuma must support him all the time with all of her ability. This made Yuma realize that all that her father cared about was the Mashiro Group company, but she must stand in her mother's stead even so. Her father then stated that the Mashiro family will conquer fate itself and that her shall triumph over death itself, cementing the fact that he turned completely insane. His insanity even led him to have sexual intercourses with his own daughter.

One day, after having sex with her father, Yuma noticed that her father was in a good mood, to which he explained that he had a contract with a facility called MANI, which specializes in nanotechnology. Recently, the Mashiro Group cooperated with MANI alongside another country that was interested in their researches regarding nanotechnology in order to bring forth a special project: Regeneration through nanotechnology, or in other words: Human cloning. This shocked Yuma to the core, but she couldn't refuse her father's words due to it being her mother's dying wish. Despite saying this inside her mind, Yuma voiced out her refusal to her father, telling her father that human cloning would mean ridiculing humans' lives. Her father scoffed on this, telling her that opinions based on emotions are pointless. This made Yuma ask her father whether he would want her or not should a clone of her existed in front of him, to which her father laughed it off, asking her whether this was jealousy of her own clone, before telling Yuma that he would never replace her as she was her daughter, and that she was his "Precious Little Doll", which annoyed Yuma from the inside, before her father told her that even if his precious daughter told him to back down from a business, he would never do so. This led Yuma to realize her role as a "Doll" for her father due to her appearance resembling that of her mother, before her father dragged her once again to bed, before having sex once again with her.

It's later revealed that Yuma's father is the one responsible for the creation of the Extend Machine, which was used to make human clones, where he allied himself with Daichi Terashima and Yosuke Kurosaki, with the later being the serial killer who killed Sachika Hirasaka. Yuma's father conducted the Extend Machine on his deceased wife to bring her back to life and to see whether it would work or not. The operation was successful, but Moi, being turned into a Creature due to an error during Santa Clara's multi check process, suddenly attacked and proceeded to place tentacles inside Yuma's father, repeatedly telling him that she loves him, before he burst in blood and gore. Daichi, however, was prepared, as he placed a self destruction mode inside the Creature that attacked Yuma's father, before activating it, causing the Creature to die. This led Yuma's father to realize that Daichi knew that this would happen, and angrily swore that he would destroy MANI and the cloning project.

One day, Yuma and her father were dancing in a dancing ball. Yuma asked her father whether it's true that he would bring down the cloning project, to which he replied positively, before telling Yuma that he needs her even more than before. Yuma then complained about the fact that the hem of her dress had frayed, which made her father buy her a new dress. When she tried it on, he told her that Moi loved this color, which made Yuma tell her that she wants to try another dress other than the one her father chose to her, which made Yuma's father enter to choose another dress. However, at that moment, a hand with a knife appeared from between the clothes, before it stabbed Yuma's father in the stomach right in front of her eyes, only for Yosuke to appear in disguise, telling Yuma's father that he was just doing his job, and that he is sure that there is someone who wants Yuma's father dead, before simply escaping. Yuma's father, injured and on the verge of death, laughed lightly, saying that there are so many who want him dead,, before falling on the ground, slowly succumbing to the poison that was coated in the knife he was stabbed with. He then told Yuma to destroy MANI and everything related to it, including the human cloning project, before dying in Yuma's arms, with his dying wish being hung on Yuma's neck like a necklace, swearing to destroy MANI and the cloning project and all what is related to it.

As with the other survivors, Yuma quickly learned that they had all found themselves on Garage Island with all their belongings stolen and an X-shaped button attached to their belly button. The group surmised that they must have been kidnapped to appear in some kind of reality TV show. 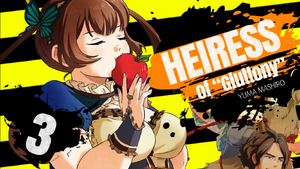 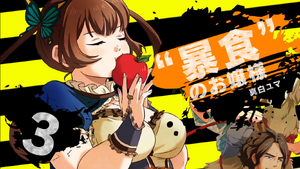