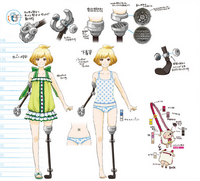 Sachika is a young adult who does not physically age, unlike the other clones. She has a more youthful appearance than the other clones, particularly as she is only around 4'5" (138cm) tall. She has a prosthetic right arm and prosthetic left leg, both made of mechanical parts. She has blonde hair in a chin-length bob, with a ponytail-type ahoge on the crown of her head. Her eyes are normally amber, but can change color when her mood changes. Her Cross-key is also different to the other clones, with a more metallic appearance rather than plastic. 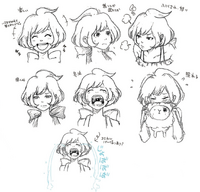 Sachika wears a yellow-green thigh-length dress which has white pleats around the bust and hips. The dress has green ribbon straps with yellow piping, which connect on her back into a very large bow. It is fastened with pink buttons up the front. She wears a shoulder bag shaped like Mirai with a pink strap, and green sandles tied with a white ribbon. Underneath her clothing, she wears white and blue spotted underwear and a camisole.

An innocent young girl, full of curiosity, with a thirst for knowledge. Due to her innocent behavior, she appears younger than she really is and unlike the other clones, does not physically age. She is very technologically adept, able to take apart, fix, and invent many different things. Sachika's favourite food is fruit, she dislikes spicy dishes, and she's allergic to onions.

Sachika was the first survivor to find themself on the island. As with the other survivors, Sachika quickly learned that they had all had their belongings stolen and an x-shaped button attached to their belly button, althought Sachika's is very different in appearance to the others'. The group surmised that they must have been kidnapped to appear in some kind of reality TV show. 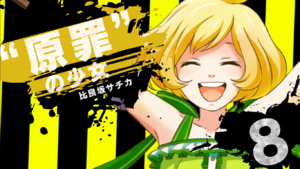 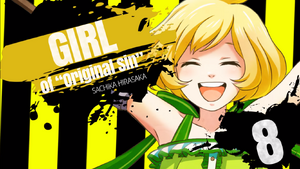