"I have no memories of my parents. The existence of my parents never meant a thing to me. A pitiful child who was abandoned by his father, and unloved by his mother...That's what people saw when they looked at me. But that was the case for most kids in the orphanage, so my situation wasn't unique. I wasn't particularly miserable because my parents weren't around, so I don't resent them for it. Besides, sympathy and pity aren't so bad once you get used to them. At least, in that moment, I'd know they were concerned for me. I wonder when it all started...That bizarre feeling smoldering inside me...which was only placated through the act of bondage. I know nobody's perfect. Everyone has their flaws. But that doesn't really matter, and I've been content so far...or so I thought. Until that moment." ― Ryo Mikajime 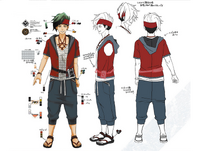 Ryo has amber eyes and long green hair which he wears tucked into a wide red headband and parted to his right side. The headband is accessorised with a diamond shaped pin. He wears a low-cut white v-neck shirt with a diamond pattern on it under a short sleeved red hoodie with a grey hood. He wears grey harem pants that are cuffed at his mid-calf and sandals made of red rope with black soles. Underneath his clothing Ryo has tied himself in turtleshell binding (亀甲縛り) with red rope. He wears a camera tied to his hip with leather strap, and he wears bracelets on each wrist. His left ear lobe is pierced and he wears a gold hoop earring.

As a child, Ryo wears a school sailor uniform with shorts and his hair is chin length. As an older adult, Ryo wears the same outfit as his young adult self, but his hair is significantly shorter and faded, and he has a short green goatee. As an old man Ryo also wears his young adult outfit but is bald, has long white eyebrows, is missing several teeth, and his goatee is white and chest-length.

Ryo is a cheerful guy with a positive outlook who is well-liked by those around him. He is a bondage artist (緊縛, kinbaku?) who is very interested in the modern art scene in general, but is extremely passionate about rope bondage of both people and objects, to the point of wearing permanent turtleshell rope binding (亀甲縛り, kikkōshibari?) underneath his clothing. Ryo always carries an instant camera with him on his hip, and uses it to take photographs of his human bondage subjects which he then displays as artworks. Ryo is not interested in rope bondage for the pornographic or S&M aspects of rope bondage, and is instead motivated by how bondage can be an artistic medium for sexuality in general. In addition to bondage, one of Ryo's other hobbies is playing video games and reading manga, in particular the manga "The Legend of the Violent Ninja Mitsuo" (暴力忍者伝説ミツオ, Bōryoku ninja densetsu Mitsuo?). Ryo's favourite food is seafood dishes, he dislikes vegetables, and he is allergic to oil-based dishes.

Ryu was one of the seven Garage Kids in the school, when the London Bridge Serial Killer threatened to kill all of them and promises to spare them if they offer one of them for sacrifice. Ryo, like the others, pointed their fingers at Sachika. Suffering from PTSD of the event, they lost their memories of their time together and the traumatic event.

After the event, Ryo's mother kept a close eye on him in hopes of avoiding a similar tragedy happen only for his wanderlust to nearly get him killed. Ryo's father to be creates a child restraint which Ryo takes a liking to and allows his mother to tie up as he liked. During an important date, Ryo was tied to a restraint by his mother in hopes of keeping him safe and well cared for. However on her return he finds her in tears as his father was killed and tries to console her by offering to be tied up. Ryo's mother's reputation rapidly deteriorates as people around her accused her of neglecting her child by denying him access to the outside world and her business venture is met with cold feet and Ryo again offers to tie himself to his mother hoping to make her happy only for them to be forced out of their home as neighbours believe Ryo was being abused by his mother.

Moving out of their home to the Mashiro Hot Springs, the Hot Springs owner takes an instant shine to Ryo like many others, offering his mother a job at the resort she attempts to court the inn keeper only for the revelation that he is sexually interested towards him. Unaware of the nature of the relationship he tells his mother about the innkeeper which causes her to have a mental breakdown and attempt to strangulate him. Passing out, he wakes up learning that his mother and the innkeeper died in a murder suicide and hopes that she doesnt have to be sad anymore. Taken to an orphanage he had a happy childhood and eventually aged out to pursue his dreams in his mother's memory

At age 25, Ryo was a young and upcoming kinbaku bondage artist. He participated in rope binding of people and took photographs of the scenes. He displayed the photographs alongside objects he had bound in art galleries and sold many of the pieces to a wide variety of people, However his artwork did not pay well and so he supplemented his income by working as a magazine photographer for subjects like fashion and food. Ryo did not consider the magazine photography his real profession and instead considers himself a bondage artist first and foremost.

As with the other survivors, Ryo quickly learned that they had all found themselves on Garage Island with all their belongings stolen and an x-shaped button attached to their belly button. The group surmised that they must have been kidnapped to appear in some kind of reality TV show. 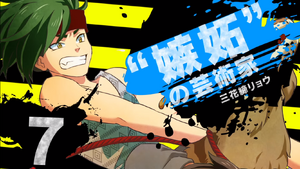 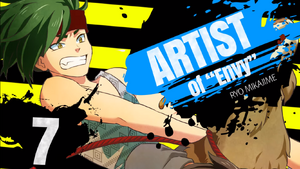