"We're all human clones who grow old and die in 13 days. But as long as we have our X Keys and SCORE Points, we can Extend as much as we want. And so, humanity went extinct, leavin' only the eight of us alive. I was gettin' used to this game's rules, but part of me still thought it was all one long dream. Or maybe... Maybe that was just wishful thinkin'. Cuz I think, more than anyone...I wanna go back to that place. But someday, I'll have to face the truth. I need to acknowledge this new reality and live through it. I understand that, and yet...I just can't accept it deep down." ― Minamo Setouchi 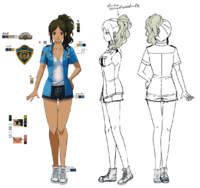 Minamo is a curvaceous woman of average height, with tanned skin and long, wavy greenish-brown hair that she wears tied back in a high ponytail, some shorter strands parted down the center of her forehead to fall down to her shoulders on either side of her face. She wears a pale blue shirt with a golden "POLICE" crest on the right sleeve and two small pockets placed either side of her chest, darker blue stripes running vertically down them and a similar pair patterning each shoulder, which she leaves unbuttoned to reveal the plain white v-neck shirt worn underneath. Minamo also wears a small pair of dark blue denim shorts with frayed edges, as well as white lace-up sneakers.

As a child, Minamo wears a black seifuku with a white collar and sleeves, along with a plain gray skirt, and her hair only reaches her shoulders. As an older adult, Minamo wears the same outfit as her young adult self, but her skin is prominently wrinkled and her hair is of a lighter and more greenish color, with streaks of paler green visible in her bangs and ponytail. As a senior, her wrinkles grow more prominent around her eyes and mouth, and her hair fades completely white, her bangs regressing up her forehead and her ponytail becoming thinner and shorter.

Minamo is a cheerful and lighthearted police officer who is honest and has a strong sense of justice, usually taking charge of taking care of others.

Minamo was one of the 7 members of the Garage Kids. He was taken hostage by the serial killer Yosuke Kurosaki together with the other members of the Garage Kids. Kurosaki forced them to choose someone out of their group to be killed by him. Due to Sachika being the popular one in school, Minamo, alongside other six, unanimously voted for Sachika to be killed, where she was killed right in front of their eyes, with the memories of this event being erased to prevent the children from suffering PTSD.

At age 25, Minamo was a police officer who, despite her young age, was also the head of Mashiro police station, which was close to Mashiro Garden Tower.

Minamo's mother was a police officer, with Minamo becoming a police officer just like her, living with her father and little brother after her mother passed away. Her father owned a Bento shop in the Mashiro Garden Tower due to Minamo's position as the head police of the Mashiro police station.

One day, she was patrolling the area around the tower, only to witness her brother passing by her as if running from something dangerous, only to discover from a salesman in a watch shop that her little brother stole a watch from his shop. She then found her brother, and spoke to him regarding him stealing the watch, to which her brother responded by the fact that he was forced to steal this watch because a gang of delinquents threatened him. Minamo promised her little brother to protect him from them, to which he hesitatingly agreed to.

A few days later, Minamo and her father noticed that Minamo's brother was coming late for home, which made Minamo anxious and worried, and made her search for her brother in the night, to which she found him with a bunch of delinquents, who wanted to avenge their friend who was placed in jail at the hands of Minamo, where they used her little brother to lure her to them, to which they captured her for revenge, beating her down to an inch of her life. According to Mirai, she was sent to the hospital afterwards.

As with the other survivors, Minamo quickly learned that they had all found themselves on Garage Island with all their belongings stolen and an x-shaped button attached to their belly button. The group surmised that they must have been kidnapped to appear in some kind of reality TV show. 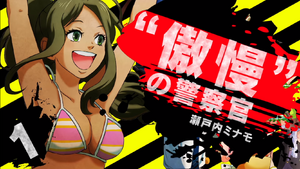 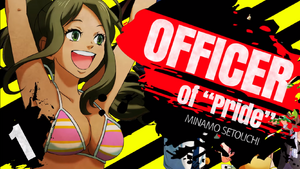